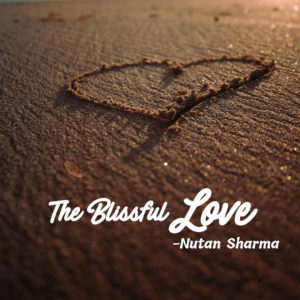 It was nearly a year back during a vacation with my husband that I first heard him singing and honestly, my heart skipped beats. The unlit black night just had the luster of the stars and the moon, which were making him glitter like a freshly stripped pearl. My eyes got engaged in beholding his spectacular charisma. Little by little I started sinking in his tantalizing aroma, unshackling myself from the manacles of a wife's social obligations.

"Aahna! I have taken the villa keys. Let's move inside." My husband said, lugging me back to reality.

I took a gander at that enticing singer. Engulfed in the overlay of the dingy night, he gazed back in a way as if he would be entreating me to tarry a bit. But, I could not.

That night was different... pleasantly different. It left me in the same tickling insomnia, which one feels when one falls in love for the first time. Yes, I fell in love - the love that sprang at first sight. Out there, he kept caroling and his dulcet music amused my ears until I fell asleep.

With the first shaft of the rising sun, I moved to the balcony, intending to satisfy my craving eyes with the enthralling looks of my newly appeared crush. He was there, right in front of me, sitting calmly with a sustained sight on my balcony. It felt like he lingered there the whole night just for me. Each sunbeam was glinting him brighter, making him look more mesmerizing. He was different... the best, the purest and the true artistry of nature. With a gentle motion, he welcomed me and swayed there with the breeze. It felt as if he was in love too.

We were lodged in the city-outers and that noon, my husband planned for going around the city. Dressing in my best outfit, I left with jollity and zest, for, I was going to have a glimpse of my love again. He was there, intoning and beguiling the vacationers. I crossed him. He was close... close enough to touch. I felt like fondling him. Unlike morning, he didn't smile this time. He stared at us and groaned, maybe out of envy. I willed to stay and appease him, but, socially-obligated me had to leave with the spouse. In wrath, he changed his course and started gliding plainly in the direction of the wind, just to follow us later as we drove along the boundary line of the city. He moved relentlessly with us, glaring me with the same discontent until we faded in the city.

I returned when the evening was all set to hand over her realm to the night. It was the most aesthetic evenfall my eyes ever witnessed. Far apart, there at the utmost end of the sight, the sun was kissing the infinitely spread water, the sky was blushing pink, and the trees were dancing cheerfully with zephyr. Oh! It was mesmerizing. But, amid that jollification, there was someone breathing high in indignation. It was him. Perhaps, he was still exasperated with my idiocy of snubbing him when he followed. I wanted to persuade him, but, socially-bounded me couldn’t do that and I returned my villa.

Under the shed of night, concealing from everyone, I walked to him. Unlike in the evening, he was not distressed anymore. He was gleaming with the light of stars, reflecting the beautiful arc of the moon. He was quivering slowly with the wind, playing the same music of yesternight. I set in front of him on the sand. He approached me briskly. I jittered and he, like a soft feather, skimmed through my feet, leaving me in tickles. That angelic touch of him gave me the bliss of heaven. All the tempests of my heart were calmed. He rendered me peace - the peace I vainly sought everywhere. There was no hubbub of the throng, no clangor of vehicles, no onus of family, and no allegiance of work. It was only me, sitting there secretly beside my newly found sweetheart in silence.

Once again, he came forward and titillated my feet. His tender caressing embellished my face with an impish smile. He trod a few steps back and swayed in merriment. I eyed him quietly, wondering if I could spend my remnant life with him. I sketched a heart in the sand with my finger and brushed my palm over it. This time, he came closer with more avidity and drenching me in his waves of love he passed through my fingers. I struggled to tether him in my fist, he swiped back.

Losing the track of time, we played the same game until the dead of night. He came, touched my hands and slipped back. I vainly attempted to clench that invincible victor again and again. For the first time, I relished losing - losing to the one who was the best, the purest, and the true artistry of nature - the Sea. I love you Sea!

Nutan Sharma, the founder & writer of The Blotted Emotions, is a native of Ghaziabad, currently inhabiting in the corporate city of Haryana. She is an MBA, B.Tech graduate, working as a Freelance Content Writer from the last   …Read More

I am a greatest fan of your writing yaar, whenever I read it I really feel it as those lines always touch my heart

I will say you are having a wonderful talent and keep going with it...there is a long way to go

I am a big fan of your writing. Your quotes and poetry inspired me a lot. I like your unique style of writing. I hope you will write like this forever.

Hi Nutan,
I love the way you transform emotions into words... your writing is beautiful.. one can easily relate to your writings ... looking forward to more posts 😍❣️

I remember the day 2016,when I first heard your poetry in class.It was magical creation with full of emotions.Since then I was following you.Your Story character "Naira" is always close to my heart.The innocence ,hidden feelings and purity of heart reflects in your every creation. Your every word touches soul. keep writing... 😊

Your writings connect. I can totally relate to each and every word you write. Your dedication and endeavors towards your passion are inspiring and appreciating. Keep it up! ✌️❣️